Everyone Matters – Toowoomba, a Model City of Peace and Harmony

The Pure Land Learning College Association (PLLCA), under the guidance of Venerable Master Chin Kung, AM, has been supporting many multicultural and multifaith activities for the past ten years. Lasting peace and harmony for all living beings is the hope that we share with everyone who travels on the same ship that we call Earth. With the seemingly endless waves of disasters, man-made and natural in recent years, we feel that it is our responsibility to do our part to help improve our chances of achieving peace and harmony.

The PLLCA Multifaith Multicultural Centre’s objective is to have Toowoomba as a Model City of Peace and Harmony. We wish to preserve and treasure the distinct features of each ethnicity and culture. With a mind that is loving, compassionate, and accepting, we can all mutually respect, accept and harmoniously treat one another impartially.

To achieve that goal, the Multifaith Multicultural Centre's efforts are based on the following:

•Vision: Toowoomba - A Model City of Peace and Harmony.

PLLCA and the Multifaith Multicultural Centre, together with strong support from faith and community leaders in Toowoomba, Australia, is offering strategies and a plan of action towards achieving the vision of establishing Toowoomba as a Model City of Peace and Harmony. 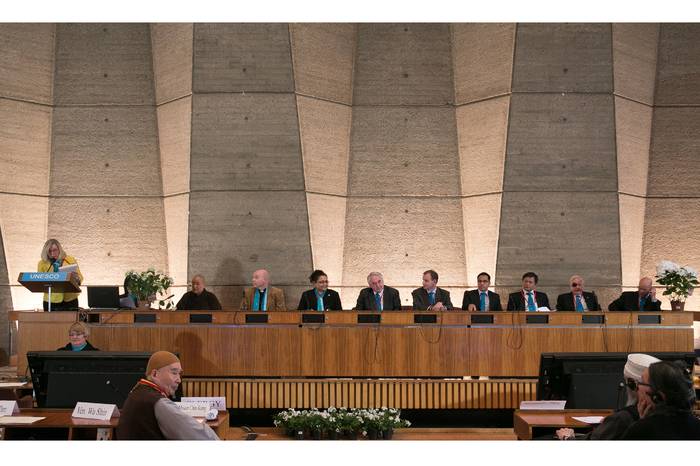 Our Founder and President – Venerable Master Chin Kung AM

Venerable Master Chin Kung AM, born in 1927, is an eminent monk in the Pure Land school of Mahayana Buddhism. He has learned Buddhism for more than sixty years and has lectured on it for over fifty years. He is advisor to over 100 Amitabha Buddhist Societies and Pure Land Learning Centers worldwide. In 2001, he founded the Pure Land Learning College Association, Inc. (PLLCA) in Toowoomba, Australia.

Venerable Master Chin Kung pioneered propagating the Buddha’s teachings via the Internet and satellite television in. His lectures are printed in books and recorded on DVDs, CDs, and other media for free distribution. He has sponsored the printing and distribution of the Buddhist Canon, Buddhist sutras, books, images, and books on moral education. All these are distributed free worldwide. To this day, the Venerable Master still teaches tirelessly on a daily basis. His lectures are broadcasted live to audiences around the world.

Born in Lujiang County, Anhui Province, China, the Venerable Master studied Buddhism and the classics under the guidance of Professor Fang Dongmei, a great philosopher of his time; Zhangjia Living Buddha, a renowned monk of the Tibetan Buddhist tradition; and Mr. Li Bingnan, a lay practitioner and master of Buddhism and Confucianism. In 1959, Master Chin Kung became a monk at Linji Temple in Yuanshan, Taipei and was given the Dharma name Chin Kung, which means “pure emptiness.” He has served as an instructor at the Tripitaka Institute at Shipu Temple, a professor of the School of Philosophy at the Chinese Culture University, and a president of the Chinese Buddhist College.

In 2005, Venerable Master Chin Kung was awarded Member of the Order of Australia in the General Division by Queen Elizabeth II. He was recognized for service to the Buddhist community in Queensland, particularly in the propagation of Buddhism and the fostering of interfaith activities between diverse ethnic groups, and to the community through his support for educational and health institutions.

In 2006, Venerable Master Chin Kung and the PLLCA were invited by UNESCO to co-organize the event “Celebrating the 2550th Birth Anniversary of the Buddha” at UNESCO Headquarters, Paris. The subject of the event was “Discover the Buddhist Contribution to Humanity”, to enable more people to learn from the Buddha how to reconcile conflict and promote social stability and world peace through education. The goal was to prove that through the moral teachings of sages and saints, it is possible to teach people to be good and to teach those of different faiths to live together harmoniously.

In 2009, Venerable Master Chin Kung was appointed an International Trustee of Religions for Peace, an international peace organization that is active on every continent. Its mission is to create multi-religious partnerships to confront issues such as stopping war, ending poverty, and protecting the earth.

Since the late 1990s, Venerable Master Chin Kung has both initiated and participated in interfaith forums and summits in many countries speaking on the importance of education. He explains that it is imperative that all religious teachers sincerely “learn to be a teacher and act as a role model for all”. He encourages these teachers to practice the teachings of the sages and saints in their daily life, delve deeply into the teachings of their own religions, and humbly learn from other religions.

In December 2011, at the ten-year anniversary celebration of the PLLCA, many faith and community leaders, including the former mayor of Toowoomba, Cr Peter Taylor, expressed their wish and support to make Toowoomba a model city of peace and harmony for the whole world. This action is a deeply meaningful and insightful one. It is an endeavour of the highest order. Subsequently, political leaders, including the current mayor, Cr Paul Antonio, and the business community have expressed their full support for this vision of establishing Toowoomba as a model city of peace and harmony.

Currently, Venerable Master Chin Kung is lecturing on the Infinite Life Sutra, with the hope that the daily teachings can transform the current mindsets of people today and help foster world peace.

Venerable Master Chin Kung’s message of loving-kindness and compassion for all has been the central theme of his teaching. Harboring thoughts of sincerity, respect, humility, harmony, and dedication to help all beings to gain long-lasting happiness and joy has been his life.